This is on the back of the United States, topping 2.74 million total Coronavirus cases. Daily new cases increased to 52,600 from 47,000 yesterday. However, President Donald Trump stated that the employment numbers prove that the economy is “roaring back.” Donald Trump predicts a resurgence before the November election, with no reference to the state of the Coronavirus in the United States.

The NASDAQ reached a record high, ending at 10,367, a 0.54% gain for the day. Other major indices edge higher, with the SP500 and the Dow Jones posting 0.12% and 0.41% gains, respectively. Interestingly to note, Gold also ended higher with futures ending at $1,788. This may be attributable to investors and traders understanding that the Coronavirus risks, especially in the United States, are still a big threat to the recovery of the economy. This is alongside major fiscal and monetary policies that have helped provide liquidity and elevating equity prices. 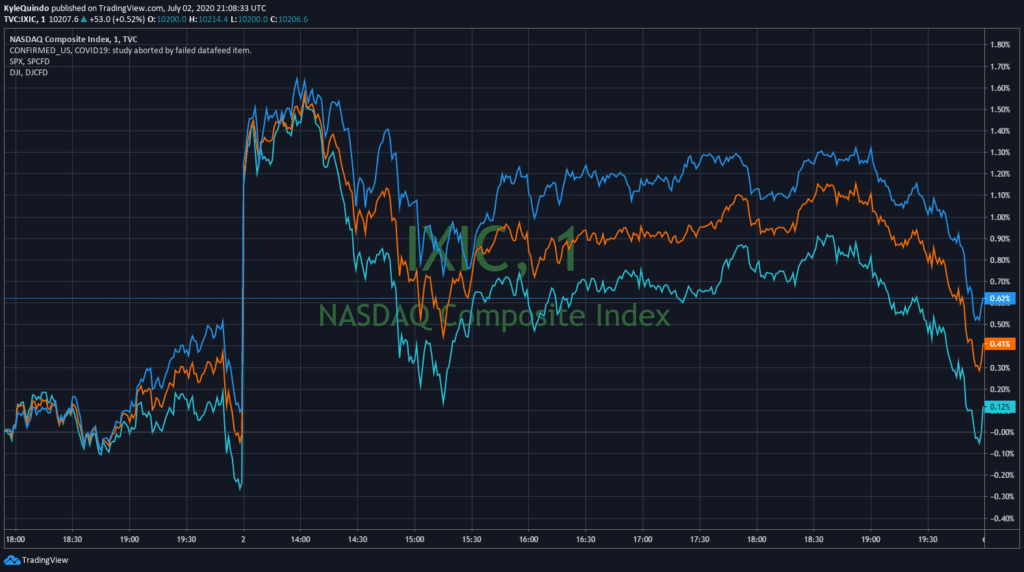 NASDAQ in Blue, SPX in Orange, Dow Jones in Teal

Equity markets, specifically in the United States, have been resilient during an extreme macro environment. Inequality protests dividing the nation, political tensions rising domestically and internationally with the election approaching amongst China’s power grab all amidst a pandemic which caused the greatest jobs lost in United States history. With non-farm payroll posting better than expected results over the past two months, a sense of progression in the road of recovery may cloud investors and trader’s judgment. Furthermore, with the FED providing virtually unlimited support, it would be reasonable to assume that participation in this market would be met with accommodative conditions.

However, the Coronavirus is still preventing many states from opening. New York is still now allowing in-person dining –from a state that has flattened the Coronavirus curve through the relatively strict lock down. Texas just imposed a mandatory face mask requirement. Florida records its highest death rate. Permanent jobs lost in the United States are still increasing. Investors and traders need to tread carefully before investing their hard-earned dollars into these propped-up markets.

Gold Futures broke $1,800 yesterday, reaching a high of $1,804 on the Comex in New York after a surge of new Coronavirus cases alongside inflationary fears.

END_OF_DOCUMENT_TOKEN_TO_BE_REPLACED

What is technical analysis?

END_OF_DOCUMENT_TOKEN_TO_BE_REPLACED

What is fundamental analysis?

Fundamental analysis involves looking at the security from a financial and economic point of view. Typically, Fundamental Analysis is a method of determining a security or products real market value. Usually, traders and investors tend to look at the longer-term view of the market, looking at financial statements and economic data such as market share, industry growth, competition, business cycles and regulation. Therefore, this type of analysis is probably not suitable for shorter timeframes.

Risk Warning: Trading foreign exchange on margin carries a high level of risk and may not be suitable for all investors. The high degree of leverage can work against you as well as for you. Before deciding to trade foreign exchange, you should carefully consider your investment objectives, level of experience, and risk appetite. The possibility exists that you could sustain a loss of some or all of your initial investment and, therefore, you should not invest money you cannot afford to lose. You should make yourself aware of all the risks associated with foreign exchange trading and seek advice from an independent financial advisor if you have any questions or concerns as to how a loss would affect your lifestyle.